I began in 1955 years ago as a mad keen horse rider and later, sport horse breeder.Since Pemberton Stud was established in 1989 I have moved to become an enthusiastic donkey competitor, breeder and driver!

It all began when I borrowed the neighbour’s donkey Hector, who sadly died in 2011, to keep my lonely horse company! We had just moved up from Wellington and my Thoroughbred was all on his own. I love showing, so of course it was not long before I was taking Hector to shows and he did well, which made me think maybe I should breed ….. and it all took off from there. I bought Holly of Pemberton my first jenny, and then my neighbour called in soon after with the Ag Trader and showed us an advert for 4 jennies in Taumaranui. Right! We went off with the float to see them. They were very lovely donkeys so we came home with all four. They were unnamed and were quickly given the opera names of Tosca, Musetta, Brunnhilde and Sieglinde . Hector and those jennies produced quality stock who were the foundation of Pemberton Stud. What pleasure those donkeys have given me. Only Musetta is now still alive and calling out for her bucket each night in her ‘retirement’ paddock, no longer able to cope with the push and shove of the younger donkeys.

My focus is on breeding larger Australian Teamster type donkeys which are suitable for carriage driving. In 2004 I imported two pure Teamsters from the Blithe Moon Stud in South Australia and the jenny Southern was in foal. So I have a nucleus of three pure Teamsters. 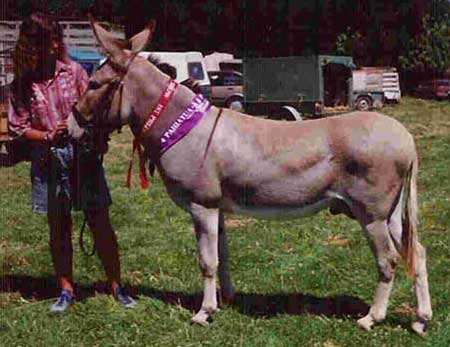 Hector Hector (deceased) The first donkey who became the foundation sire of my stud and the winner of the Donkey & Mule Society of NZ Colin Thom Memorial Perpetual Cup 2006, 2007 & 2008. Hector